Open Core Summit illuminates the intersection of Open-Source and Entrepreneurship to accelerate the growth of our World’s most valuable and inclusive technology ecosystem.

In particular, OCS is the medium through which each generation of founders and builders can share their knowledge and experiences with the next generation of Commercial OSS (Open-Source Software) leaders.

This page lays out:

Since the dawn of the modern internet in the early 1990’s, the Open-Source movement and paradigm has driven the vast majority of innovation and value creation in digital technology (software, and, increasingly, hardware).

While value creation is complex and qualitative in nature, it is possible to size the impact of Open-Source using value capture which refers to value created for shareholders and is measured though quantifiable economics: company market size, revenue, valuation, funding, etc

If one were to measure the aggregate value of all tech/software companies globally, this number currently hovers around $10 Trillion ~, as of 2020.

So, who exactly has captured those $10T~ dollars thus far? Companies in the Enterprise Software, Cloud Computing, SaaS, Consumer apps, eCommerce, internet, Social Media and IT sectors. These companies take tremendous advantage of Open-Source value creation, but don’t always contribute much back.

Therefore, we believe the next generation of transformative companies will be most successful when closely aligning with Open-Source fundamentals: not only consuming and building upon Open-Source, but creating and contributing to it as well!

What do nearly all these IT sector companies have in common? They are “Closed Core” companies that have captured value largely unlocked by the Open-Source movement.

But what exactly is a “Closed Core” company? Any for-profit company that builds its essential product and/or service which is also largely or entirely owned, controlled, developed, distributed and sold (exclusively) by that same company.

“Open Core” oriented companies (or “COSS” (Commercial Open-Source) companies as we refer to them at OCS) are any for-profit company that builds its essential product and/or service on an Open-Source core technology that anyone (inclusively) can contribute to, change, distribute and/or commercialize.

Open-Source has succeeded and continues to drive the technology world forward at the fastest pace due to several fundamental principles stewarded by the OSI: anyone, anywhere, at any time, without discrimination, can view, modify, distribute and directly or indirectly commercialize the technology. Ensuring these rights are upheld universally is implemented in the form of OSD-approved licenses.

So, is there anything “wrong” with Closed Core companies? Not at all! Humanity has benefited immeasurably and continues to as businesses like Google, Apple, Netflix and many others have amplified human insights, creativity and productivity.

However, we know there is something special happening in the world with the rise of Open-Source, the internet, remote work and distributed innovation.

Motivation for OCS and COSS

The following four realities have motivated and driven the founding of OCS:

Over the last decade (2010-2020), the number of larger ($50M+ in revenue) Open Core oriented companies has grown remarkably from less than 5 to more than 60! Some data on this evolution is provided here. Overall, this category (we call it “COSS”, Commercial Open-Source Software) refers to a specific type of company that would not exist unless a given core Open-Source technology also tautologically existed. This category definition is purely existential in nature and is entirely agnostic to business models or anything else.

“COSS, Commercial Open-Source Software, refers to a specific type of company that would not exist unless a given Open-Source core technology also existed. This category definition is existential in nature and is entirely agnostic to any specific business model, sectors, or technology.”

On nearly every meaningful dimension, COSS companies are quite different as compared to Closed Core companies: culture, product, hiring, engineering, strategy, marketing, finance, business models, legal, etc. One only need speak with an operator or founder who has worked at both types of companies to appreciate how real these differences are. More higher level detail on many differences is provided below: 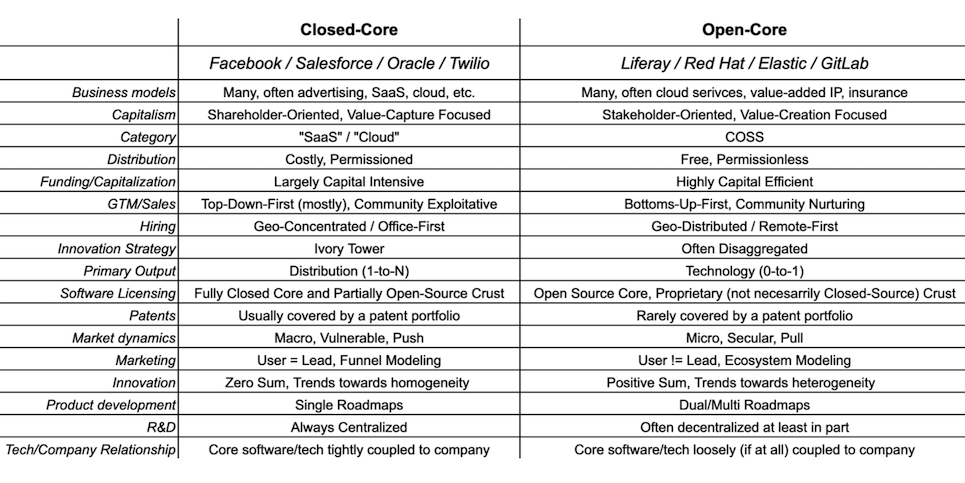 In the tech industry, many people often refer to COSS companies as “Open-Source companies”, but this term is somewhat oxymoronic (like calling a feather heavy.. since it is quite literally impossible for a company to itself be Open-Source). Further, the nature of building and scaling COSS companies is highly unevenly distributed and how-to knowledge from zero-to-scale is trapped in the minds of a small number (we estimate less than 500~) experienced people in the world. One chief aim of OCS is to grow this number substantially over the coming years and decades.

Until now, the COSS ecosystem has been missing a focused place to inclusively network, learn, democratize access, compare notes, strategize, collaborate and celebrate growth. Innovators need a forum where the value proposition of Open-Source development does not need to be explained from square one. Enterprises need a community to learn about the latest technologies, vendors and platforms to help them digitally transform towards an Open-Source future.

“The future is already here – it's just not evenly distributed.”

The primary mission of OCS is to globally and inclusively accelerate the normal/even distribution of knowledge about the Open Core approach to company building and the COSS category itself.

As mentioned previously, we believe that as of 2020 there are less than 500 people on earth with extensive experience building and/or founding COSS companies from zero-to-scale.

In particular, OCS aims to continuously transfer the knowledge of COSS company building from the first generation (2000-2020) of successful COSS builders and founders to the next generation (2020-2040+) who have the potential to bring transformative positive sum ecosystems to the world.

Where do COSS founders originate? Mostly in the Open-Source ecosystem! Open-Source creators and participants, by GitHub’s count, measure in the tens of millions of humans globally. One of the primary goals of OCS is to reach and educate the inventors, creators, innovators and builders in the Open-Source movement about one potential path to capturing some of the value they create: to learn about COSS and how to form and build a COSS company. Large or small. Funded or unfunded. Global or local.

As part of the OCS mission, inclusion is at the core - many constituents are invited to learn and share in the knowledge distribution of the COSS ecosystem, its trends, fundamentals and more: investors, cloud providers, analysts, SIs and beyond.

Open-Source is fundamental to the Open Core approach. Without honoring the fundamentals of Open-Source at the core, the COSS ecosystem would not exist.

Our two core values are:

Inclusion: Anyone interested in the intersection of Open-Source and business is welcome to attend, learn and speak (with experience and knowledge to provide) at OCS. Cloud providers are all welcome, SaaS vendors are all welcome, investors are welcome, non-profit organizations are also welcome.

Respectful disagreement: Due to the often divisive nature of points-of-view around commercialization, business building and related areas in the context of Open-Source, OCS focuses heavily on ensuring that all speakers voice their points of view respectfully without antagonizing others either indirectly or directly towards attendees, other speakers or the industry at large.

We believe that fostering respectful disagreement among contrasting views in evolving areas of conversation yields the best learning outcomes.